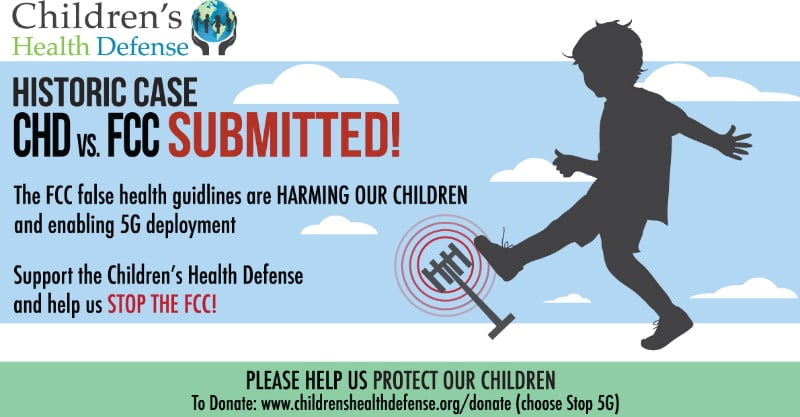 WASHINGTON, Feb. 3, 2020 — Children’s Health Defense (CHD) is leading a historic legal actionagainst the Federal Communication Commission (FCC) for its refusal to review their 25 year old guidelines, and to promulgate scientific, human evidence-based radio frequency emissions (“RF”) rules that adequately protect public health from wireless technology radiation. The Petition contends the agency’s actions are capricious and not evidence-based. The Petition was filed on 2/2/2020 in the U.S. Court of Appeals for the Ninth Circuit.

The Petitioners include parents of children injured by wireless devices, a mother whose son died from a brain tumor from cell tower exposure, physicians who see the epidemic of sickness in their clinics and Professor David Carpenter, a renowned scientist.

“This action represents the first time in 25 years that we finally can expose the FCC fecklessness in court, and give those who have been injured by the FCC’s disregard for human health a voice,” says Dafna Tachover, CHD’s Director of Stop 5G & Wireless Harms.

In 1996, the FCC, responsible for regulating the safety of wireless technology, adopted guidelines which only protect consumers from thermal levels of wireless harm, ignoring substantial evidenceof profound harms from non-thermal levels. The FCC hasn’t reviewed its guidelines since, despite clear scientific evidenceand growing rates of RF related sickness.

In 2012, the General Accountability Office published a report recommending that the FCC re-assess its guidelines. As a result, in 2013, the FCC openeddocket 13-84 asking for public comment. Despite overwhelming evidence in support of new rules submitted by hundreds of individuals and scientists, the FCC did nothing. On December 4, 2019, the FCC closed the docket and affirmed the adequacy of its guidelines without proper assessment. CHD’s action challenges thatFCC decision.

The FCC’s obsolete guidelines and the false sense of safety they provide enabled the uncontrolled proliferation of wireless technology and the ongoing deployment of 5G, which will exponentially increase exposure to this harmful radiation.

CHD is a non-profit organization dedicated to ending the epidemic of children’s chronic health conditions. The organization recognizes that wireless technology radiation is a contributing factor to the exponential increase in sickness among children.

Sign upfor free news and updates from Robert F. Kennedy, Jr. and the Children’s Health Defense. CHD is planning many strategies, including legal, in an effort to defend the health of our children and obtain justice for those already injured. Your supportis essential to CHD’s successful mission.