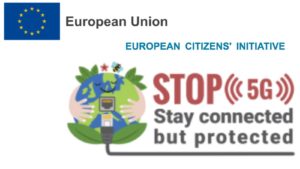 The organizers of the initiative call on the Commission to propose legislation to better protect all forms of life from certain alleged risks of radio frequency electromagnetic fields and microwave radiation, to protect against certain other alleged environmental impacts of 5G and related digitalisation, and to ensure effective protection, including against cybercrime, of personal data processed with these new forms of communication technology.

The decision to register is of a legal nature and it does not prejudge the final legal and political conclusions of the Commission on this initiative and the action it will intend to take, if any, in case the initiative obtains the necessary support.

As the ECI fulfills the formal conditions established in the relevant legislation, the Commission considers that this ECI is legally admissible. The Commission has not analysed the substance of the proposals at this stage.

The registration does not imply that the Commission in any way confirms the factual correctness of the content of the initiative, which is the sole responsibility of the group of organisers. In fact, a number of the claims made in this initiative run contrary to the body of scientific evidence available to the Commission, and to the assessments made by the International Commission on Non-Ionizing Radiation Protection (ICNIRP), the body mandated by the World Health Organization to assess the risks for health.

Following today’s registration, the organizers can start the process of collecting signatures. If an ECI receives 1 million statements of support within 1 year from at least 7 different Member States, the Commission will have to examine its content in detail and react. The Commission could decide either to follow the request or not, and in both instances would be required to explain its reasoning.

The European Citizens’ Initiative was introduced with the Lisbon Treaty as an agenda-setting tool in the hands of citizens. It was officially launched in April 2012. Once formally registered, a European Citizens’ Initiative allows 1 million citizens from at least seven EU Member States to invite the European Commission to propose legal acts in areas where it has the power to act. The conditions for admissibility are: (1) the proposed action does not manifestly fall outside the framework of the Commission’s powers to submit a proposal for a legal act, (2) it is not manifestly abusive, frivolous or vexatious and (3) it is not manifestly contrary to the values of the Union. Since the beginning of the ECI, the Commission has received 109 requests to launch an ECI, 84 of which were in fields where the Commission has the power to propose legislation and thus qualified to be registered.

The Commission stresses that the protection of public health is of paramount importance and taken into account in all its initiatives. When it comes to exposure limits for electromagnetic fields, including 5G, in particular, the EU has applied a precautionary approach by recommending maximum exposure limits with a wide safety margin, based on up-to-date and constantly reviewed scientific evidence.

This means, that EU exposure limits for the general public are always at least 50 times lower than what international scientific evidence suggests as having any effect on health.

In addition, the European Commission remains committed to using up-to-date scientific evidence for its policy proposals. The Commission mandated in June 2021 the Scientific Committee on Health, Environmental and Emerging Risks (SCHEER) to provide scientific opinions on the need for a technical revision of the EU legislation in place (i.e. the annexes to Council Recommendation 1999/519/EC and Directive 2013/35/EU), in particular in view of the updated guidelines of the International Commission on Non-Ionizing Radiation Protection (ICNIRP) of 2020. The independent scientific advisers will evaluate and take into account, as appropriate, all available evidence.

Over 600 cities in Italy have passed resolutions to halt 5G until safety research has been completed adding to numerous cities around the world.

In the United States, the New Hampshire Commission to Study the Environmental and Health Effects of Evolving 5G Technology has released its final report recommending reducing public exposure to radio frequency radiation, measuring RF radiation levels and replacing Wi-Fi with wired (not Wi-Fi)  devices.  Resolutions to halt 5G have been passed by Hawaii County, Farragut Tennessee, Coconut Creek Florida, and Easton Connecticut. Cities such as Los Altos,Petaluma, Mill Valley, and San Diego County California have adopted policies to restrict 5G small cells near homes. Oregon passed a Bill to study Wi-Fi health effects. Hundreds of scientists and thousands of doctors are calling to halt 5G and reduce exposure to people and the environment.

If you live in the USA, join EHT’s letter-writing campaign calling on Congress and your state elected leaders to support the scientists and to take immediate actions after this landmark court won.

5G deployment is putting our rights to a healthy environment, freedom and privacy at stake.
We call on the Commission to propose legislation to protect citizens and the environment from these threats:

2. With 5G the amount of connected electronic devices, antennas and satellites will explode. Unsustainable energy consumption, radiation emissions, harmful mining and pollution will follow, which will endanger biodiversity and natural habitats
— Enact stronger regulation to protect the environment from all the impacts of 5G and digitalization*

*specific proposals in the annex

Hundreds of peer-reviewed scientific studies independent from industry including the most recent research prove radiofrequency electromagnetic fields (RF EMF) have harmful bioeffects at intensities millions of times lower than current limits. We demand the application of the precautionary principle to RF EMF in order to protect against risks to the environment and human health

Ten proposals to implement in EU law
1. Enact RF EMF exposure limits based on all health and biological effects, not only those related to temperature, to protect humans – above all children, pregnant women, patients, the elderly, the infirm, electrohypersensitive people (EHS), those injured by this radiation and those using electromedical devices or implants; apply the precautionary principle
2. Update Recommendation 1999/519/EC and Workplace Directive 2013/35/EU. These “should be regularly reviewed and reassessed”
3. Recommendation 1999/519/EC and Workplace Directive 2013/35/EU “must be based on the best available scientific data”. We demand limits are set to the MOST PROTECTIVE AMONG ALL scientific and empirical guidelines available, including
• Council of Europe Resolution 1815
• Bioinitiative 2012
• Building biology evaluation guidelines
• EUROPAEM EMF Guideline 2016
4. Ensure additional exposure guidelines are made by scientists with biomedical expertise and who are free from conflicts of interest: appoint a new panel or expand SCHEER’s activities to assess RF EMF’s bioactive parameters
5. Ensure the testing of wireless devices, antennas and their operation assesses all biologically active parameters of RF EMF
6. Replace wireless connections with cables. Do so immediately in places such as hospitals, kindergartens, schools, retirement homes, all public buildings
7. Educate the public on the hazards associated with wireless connections and how to minimize exposure (e.g. using cables)
8. Advise member states to provide low/no radiation zones in municipalities. Declare all nature reserves and parks low/no radiation zones
9. In order to protect human health and bio-integrity, ask EU citizens for informed consent before exposing them to RF EMF
10. On the basis of the precautionary principle, enact a directive regarding RF EMF exposure limits for the protection of fauna and flora

Far from being a step towards an energy efficient and sustainable future, 5G and the introduction of the Internet of Things will greatly contribute to pollution and resource depletion. By 2025 they could account for 20% of worldwide electricity consumption

Eight proposals to implement in EU law
11. Update Directive 2011/92/EU to include 5G deployment and all telecommunication as projects in Annex 1 to ensure that such projects are made subject to environmental assessment or a screening as prescribed by the directive
12. Reduce the massive electricity consumption caused by digital communication technology by prioritizing wired and low energy solutions in the action plan for the European Green Deal
13. Include “Waste from Electrical and Electronical Equipment” (WEEE), other waste products, and the environmental impacts of mining for rare earth minerals and metals used in electronical equipment in the “Zero pollution action plan”
14. Update Ecodesign Directive from 2009 setting tight limits to resource and energy waste of all connected devices including antennas and satellites
15. Recognize all biologically harmful parameters of RF EMF as a pollutant. Include them in all relevant EU Policies and Directives
16. Include monitoring of all biological harmful parameters of RF EMF in Environmental monitoring programmes, Biodiversity Strategy 2030, EU Nature restoration targets, Habitats and Birds Directives and Natura 2000
17. Call for an immediate moratorium on 5G satellites mega-constellations worldwide until the environmental adverse effects are resolved
18. Make an environmental impact assessment of all space projects a priority within the European Space Policy

Current data protection is insufficient in an Internet of Bodies and Things scenario in which all devices are collecting our data 24/7, to be processed as Big Data by artificial intelligence which has been proven to reproduce and aggravate discrimination. It is also extremely concerning that 70% of investment in 5G is in surveillance systems, including facial recognition cameras and drones.

Five proposals to implement in EU law
19. Launch an impact assessment of the effects of 5G, including connected objects and bodies, on personal data protection and evaluate compliance against current data protection laws
20. Protect citizens against the increasing cybercrime by applying the principle of data minimization to collection via wireless (such as medical and banking data)
21. Ensure the European Data Protection Board fight actively and independently against discrimination and digital rights violations
22. Require each citizen’s explicit consent in order to subject their data to any automated procedure
23. Organize public debates on whether or to what extent to authorize digital innovations, led by scientists with biomedical expertise and who are free from conflicts of interest: appoint a new ethics committee or expand EGE’s activities