On 14th May 2020, Facebook started to block links to Electromagnetic Sense Ireland and have now removed ALL links to our website (ES-Ireland com), shared across the forum for a number of years.  Pages shared directly from our website alone in the last year had been over 9,000.

Facebook’s reason:  ES-Ireland’s content goes against their “Community Standards” and has been reported as “abusive”.

Electromagnetic Sense Ireland (ES-Ireland), set up in the 1990s, is a group of individuals countrywide who are suffering from microwave sickness, an environmental impairment now more commonly called Electrohypersensitivity, (EHS).  ES-Ireland is not only a contact point for sufferers but also a resource of factual information for the public regarding the potential adverse health effects of EMF, a responsibility adopted, given lack of leadership, and based on the contents of the E.U. Parliamentary Resolution 1815 (2011) regarding ‘The Potential Dangers of Electromagnetic fields and Their Effect on the Environment’.

As a group, who embody the evidence of harm from EMF, who provide factual information and who are not anti-technology but pro safe technology i.e. wired systems, this appears to have been an act of undisguised blanket censorship and a worrying development under society’s banners of democracy and human rights.

As ES-Ireland does not have a Facebook account, we now depend on the public and concerned others who may find this breach of human rights a worrying trend in surveillance, especially in light of Facebook’s own rhetoric about its standards on freedom of speech.  Granted, our message is different to that of the Government and its agencies regarding EMF but it is factual and referenced to research of world-renowned independent scientists.

Facebook describes its users as a community but as many are now finding, Facebook are silencing many members of this community and blocking diverse opinion as well as peer-reviewed science.  If you have a Facebook account, we ask you if you would please support us by posting a link to our website and when you are refused access, fill out the form that appears, to let them know why they have made an error in blocking ES-Ireland.

The voices of people adversely affected by EMFs have been ignored and silenced for decades.

Please speak up for those who have been made silent. 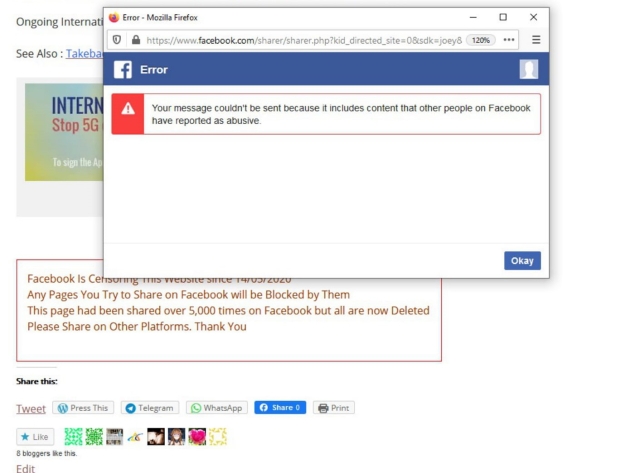